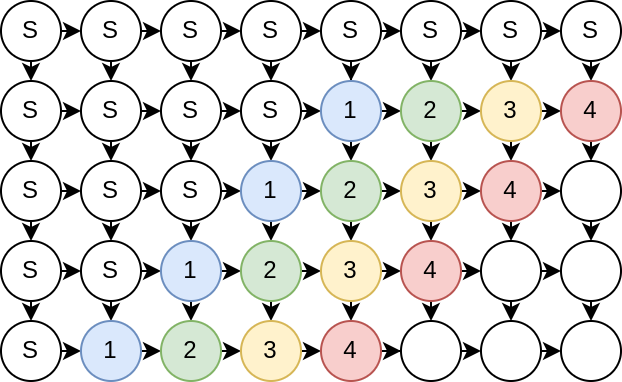 As I already mentioned in earlier posts, vectorization is the holy grail of software optimizations: if your hot loop is efficiently vectorized, it is pretty much running at fastest possible speed. So, it is definitely a goal worth pursuing, under two assumptions: (1) that your code has a hardware-friendly memory access pattern1 and (2) that there are no loop-carried dependencies2.

However, the world is not ideal and there are loops with dependencies that we want to run faster. The question is if they can benefit from vectorization? The answer is not simple and in this post I will try to answer it.

A short introduction to vectorization

To illustrate vectorization, have a look at the following loop:

When written like this, a developer would expect the following pseudoassembly:

This code loads two values from the memory belonging to arrays a and b and stores them to registers reg0 and reg1 (lines 2 and 3). It then adds those to values together (line 4) and stores it back to the memory (line 5).

Under vectorization framework, instead loading one by one piece of data, the compiler could utilize CPU vector instruction to process four by four pieces of data. Thus, the pseudoassembly could look like this:

The code loads 4 values at once and stores those four values to register reg0 (line 2). Similarly, it performs 4 addition (line 4) and stores 4 results back to the memory (line 5).

The problem with dependencies

In this example, vectorization is impossible and there is nothing we can do about it. However, there are many cases of loop-carried dependencies where vectorization is possible, as you will see in this post.

Let’s investigate again the loop which adds together two matrices:

Loop-carried dependencies are typically represented using dependency graphs, which in our case can look like this:

The compiler can automatically vectorize this loop, and execute it row-by-row. The compiler picks row-by-row execution because of the way the loop is written. Running through a matrix row-by-row is also the most efficient for the memory subsystem. If the CPU executes four iterations simultaneously, the order of execution will look like this:

This code is efficiently vectorizable since all architectures support loading and storing consecutive memory addresses. Also, compilers are good at automatically vectorizing such code.

Let’s consider a different loop, but this time the loop has loop-carried dependencies:

So, if you look the innermost loop, you will see a loop-carried dependency. To calculate out[i][j], the code needs the value out[i][j - 1] which was calculated in the previous iteration, etc. At first glance, the loop seems unvectorizable.

Let’s draw the dependency graph for this loop:

Is it possible to improve the speed of such loop through vectorization? Yes, it is. But to do it, instead of executing rows one by one, we run the calculations for four rows simultaneously. The ordering would look like this:

There are two limitations to outer loop vectorization. First, the target architecture must support data gather and data scatter instructions in order for the vectorization to be efficient (read more about gather and scatter here). Unfortunately, gather and scatter instructions are not ubiquitous. On X86-64 platform, only gathers are available in commodity hardware (which typically supports AVX2 vector extensions). Scatters are available only with AVX512 vector extensions, and these CPUs are rarely seen on desktops. As far as ARM is concerned, NEON vector extensions found in phones and embedded system support neither gathers nor scatters. Gathers and scatters can be emulated, but this makes vectorization less efficient.

The second problem is that the compilers typically do not vectorize these loops automatically. In theory it should be possible with #pragma omp declare simd directive, but in practice it doesn’t work. The result is that you will need to use compiler intrinsic to do the vectorization, and this process can be tedious.

Let’s increase the difficulty. We have the following loop3:

At first look, the graph suggests that vectorization is not possible. Everything depends on everything else. But this is not the case. We can vectorize the loop if we run it in the following order:

The nodes marked with S must be calculated using scalar code. The colored nodes can be executed using vector code. If the matrix is large enough, we should see speed improvements.

The problems with this approach are the same as the previous one. The compilers cannot automatically vectorize such codes, so they must be written using compiler intrinsics. In addition, gather and scatter instructions are needed as well.

Where else can we apply outer loop vectorization?

In this example, the inner loop vectorization is possible, but it doesn’t pay off. This is because the memory access pattern for variables b[j][i] and c[index[j]] is inefficient. Every time the value of j changes by one, access to b[j][i] moves n elements in memory. For the array c[index[j]], every time j changes by one, the CPU is accessing random memory address.

With outer loop vectorization, we run four or eight instances of the inner loop simultaneously. For example, in a single vectorized iteration, the CPU will be executing scalar iterations [i,j] for values of [i,j] between [0,0] to [7,0]. When doing it like this, the access pattern for b[j][i] becomes more efficient (because j is constant); the same applies to the access pattern of c[index[j]] (again because j is constant).

Another reason for outer loop vectorization is when the inner loop has a low trip count. Consider the following example:

Why does outer loop vectorization matter?

In our examples, outer loop vectorization was limited to matrices. But its usefulness is much greater: it can be used to improve the access speed to hash maps, trees, linked lists and other data structures. Instead of performing an operation on one by one piece of data, the same operation is performed on several pieces of data at once.

An extension of outer loop vectorization is applying the same operation to a collection of data: hash map lookups on a collection of keys, calculating string length for a collection of strings, etc. This is a powerful technique to improve the speed of such operations, although it comes with many limitations we talked about.